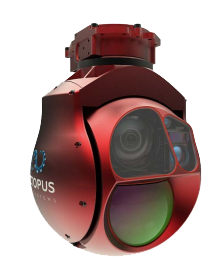 Equipping a miniature airborne gimbal with precision geo-location presents a multitude of challenges: first, the gimbal operates in a high vibration environment and is subjected to high accelerations and extreme ranges in temperature. In addition, small size and low power consumption are significant factors for miniature gyro-stabilized gimbals which are often used in unmanned aircraft.

The attitude solutions commonly available onboard unmanned aircraft typically do not present a reliable solution. “Traditionally, small gyro-stabilized gimbals use an external heading source to estimate the geo-location of the target,” stated UAV Factory CEO Konstantins Popiks. “Onboard the unmanned aircraft, the attitude data is usually supplied by an autopilot, and the estimate accuracy is not very precise due to the nature of low-cost sensors used in miniature autopilots. Miniature autopilots simply do not need the precise heading data required by the gimbal, and as a result, the heading error generates large geo-location errors and provides little to no use for the unmanned aircraft operator. There are also additional errors due to misalignment of the gimbal and autopilot, as these are separate subsystems mounted in different locations on individual soft vibration mounts.” 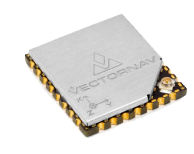 To enable the Geo-Lock feature an external GPS/INS needed to be integrated, and such a GPS/INS needed to provide a high level of accuracy. “Today the stateof-the-art miniature gyro-stabilized gimbals have a narrow field of view of less than 1.3 degrees; therefore, the accuracy of the pointing should be significantly better than 1.3 degrees to prevent the target pointing location from going out of the video frame” said Popiks. In order to guarantee the successful implementation of the Precision Geo-Lock feature, UAV Factory partnered with an expert in the field: VectorNav Technologies of Dallas, Texas, USA.

VectorNav is a leading developer and manufacturer of high performance inertial navigation systems using the latest in MEMS sensor and GPS/GNSS technology. VectorNav’s Industrial Series line of inertial navigation solutions provide the smallest, lightest and lowest power consumption solution in the industrial-grade inertial navigation performance category (attitude accuracy 0.1-0.3). "VectorNav's VN-200 was the only product on the market that offered a high-level of performance but small enough form factor that it could be integrated directly into the optical bench of the gimbal" said Popiks. "When the product delivered that level of accuracy despite the high vibrations, accelerations and temperature fluctuations of our application the choice was obvious.”

UAV Factory’s Precision Geo-Lock provides better than 0.3 degree accuracy and is ‘Plug-and-Play’ so the customer can install the Epsilon gimbal and get accurate results on any platform and in a high-vibration environment. Epsilon gyro-stabilized turrets will be available with both VectorNav’s VN-200 single GPS-based INS solution, as well as the VN-300 dual PS-based INS. A single GPS/INS solution is suitable for dynamic platforms such as manned and unmanned aircraft, while dual GPS/INS is a necessity for platforms with low dynamics, such as aerostats, ships and helicopters.

UAV Factory Ltd. is among the world’s leading developers and manufactures of fixed wing composite small unmanned aircraft and subsystems for the 55lbs and under class UAS. In 2012 UAV Factory’s Penguin UAV set a 54.4-hour flight endurance world record. Since 2009, UAV Factory has delivered hundreds of aircraft, subsystems, and sensor gimbals to over 40 countries. UAV Factory has locations in Europe and the USA providing support to customers around the world. Octopus ISR Systems is a subsidiary of UAV Factory created in 2016 to provide NONITAR controlled cutting-edge gimbal solutions to both manned and unmanned industries.

VectorNav Technologies is the leading innovator and manufacturer of embedded navigation solutions, using the latest in MEMS inertial sensor and GPS/GNSS technology. Since its founding in 2008, VectorNav has provided systems integrators in the military, aerospace, marine, and robotics industries around the world with SWaP-C optimized, high-performance navigation systems. VectorNav has unique expertise in applying the digital filtering and sensor calibration techniques that have multiple decades of heritage in aerospace applications to the stateof-the-art in MEMS inertial and GPS/GNSS technology.